New image of a Grand Barbet

When you are researching a breed much of your time is spent reading the same information as it was common to copy other authors,  with just a few  different words added.
However, sometimes you stumble upon a different account/view or you find a new picture.
Last night, bingo.....1767 Grand Barbet or Caniche drawn by a well known illustrator.
To view go to the bibliography on the Novaforesta site under pre 1800.
Posted by Wendy at 09:37 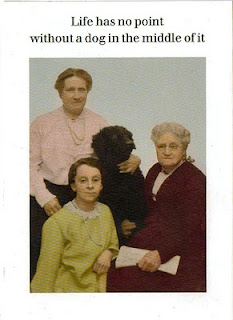 This has to be one of my best Birthday cards.
The dog even looks familar
Posted by Wendy at 09:27 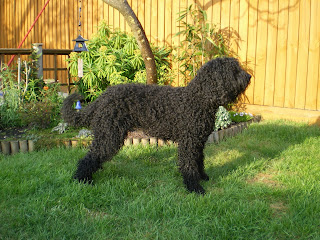 Good news, the Barbets will be attending on Friday, Saturday and Sunday this year.

Please come and see us and meet the dogs, its a fantastic event rain or shine.

Bepop and I will be there on Sunday, Betsy will be at home as we hope that she will be in whelp.

Betsy and the treadmill

I thought we were making progress with Betsy and the treadmill, but she has now learnt that if she puts her feet on the edges, she doesn't have to even walk. When Betsy makes her mind up about something then there is little one can do about it other than smile!. If you saw the size of the edge that she places her feet you would say its impossible, I must try and get a photo. Luckily Betsy does love running and this weekend she managed a staggering 16 miles over 2 days with my husband. The consequence of owning 4 dogs and walks in the forest, is the amount of dirt in the house, the forest is just mud and my outside tap is out of action so they are drying off inside at least I am thankful I don't have carpets, but my dustpan and brush is working overtime.
Posted by Wendy at 09:52

Coat of a waterdog 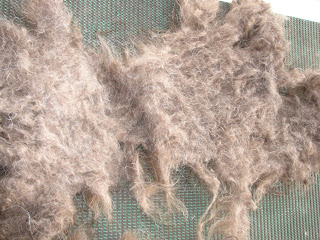 This is just an example, as most of the barbets I groom, the soft hairs are groomed with the top coat so the knitting together of the softer coat is less obvious. I also don't shave that many. To the untrained eye, Mr Bentley yesterday did not look as though his coat would come off in large sections like the photograph, the soft hair feels like his skin. Its a true woolly jacket for a barbet. Hard to believe that this dog was wet when he arrived, so that shows also that his skin had been kept bone dry. Mr Bentley is brushed by his owners, and they do rely on myself to advise on whether he needs shaving or just a good groom out, teamwork really to make sure the dog is comfortable.
So now you all know whats under the curls!
Posted by Wendy at 08:28

Just a taster, the full story can be read here:

''Little is know of the parents of Petrus Gonzales as he was taken, as an infant, from his home in the Canary Islands to be presented to King Henri II in Pairs. Why was Petrus of such interest? Petrus Gonzales’s entire body – including his face, was covered in long, wavy hair and he was an immediate medical sensation.
In 1557, the first formal report appeared, written by Julius Caesar Scaliger. In his report about the famed boy of Paris, Scaliger referred to the lad as Barbet – the same name used to identify a breed of shaggy dog''.
Posted by Wendy at 15:56 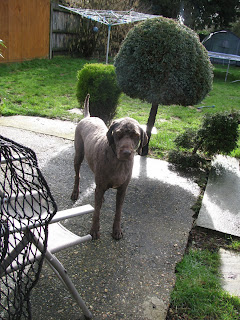 It must be nearly spring as its a short back and sides for Mr Bentley. Glad I did it, as I removed several ticks that were very well hidden under his coat. Nice for him being short as he went back to being a puppy and ran madly round the garden with Bobby, when I just groom him out he doesn't do that!!. Mr Bentley is just a fantastic pet that lives his life in the forest, he is not a showdog. Those that show barbets do sometimes shave their barbets but ofton leave the ears, head and tail long as they say they take the longest to grow and a feature of the breed is the beard.
Posted by Wendy at 15:40 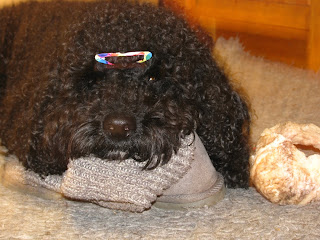 A blanket to lie on, a bone to chew and a childs boot to rest his chin, the only missing item is a toilet roll half chewed!. The hairclip he had retrieved earlier probably from under a bed, and rather than lose it again I put it in his hair to keep it safe. Luckily he cannot see it!!!, its a bit girlie
Posted by Wendy at 14:48

Yesterday I groomed Betsy, from top to tail and it took about 1.5 hours to do everything which included ears, nails, pads, armpits etc. It has been 4 weeks since her last groom, and her hair length is 6-7 inches curled. I am not bathing her, as she doesn't need it. although bear in mind I am a groomer by trade.
Betsy was shaved completely whilst living in France as a puppy, I cannot therefore know how her coat would have developed if she had not been shaved as a youngster. The good news is that considering she has a life of walking and running in mud and alot of swimming, her coat is manageable.
I am lucky, all my dogs are good about being groomed, they know they have to stand, they know it may pull a bit, if they were asked its probably not the highlight of their day and actually if I want to clear the room I just say 'bath time'. Anyway, back to Betsy and today she looks as though she was not brushed at all, she has her beautiful curls back.
Posted by Wendy at 15:13

Caya the proud Father of 12 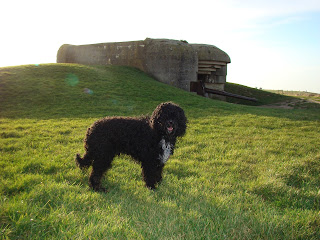 An up to date photo of Caya, the proud father of 12 pups born to Bepop in 2008. Caya lives near the beach in France, he loves the sea! Bepop and Caya met up in Le Blanc in 2009, they were so pleased to see each other again.
﻿
Posted by Wendy at 14:26

Jazz the Standard poodle with the children

It is hard work having a young family and getting a puppy, my youngest was only 18 Months old when Jazz arrived on the scene. However when I look back on videos like the above, its a wonderful time and the pleasures of dog ownership outweigh the difficult times. In hindsite, the best time for a puppy is probably when your  last child goes to Nursery, as this gives you more time to spend teaching a puppy right from wrong.Anyway, I have no regrets and my children cannot remember life without Jazz.
Note the immediate difference between a Barbet and a poodle, my Barbets have never balanced on their back legs and waved, that is a strong poodle characteristic!
Posted by Wendy at 09:38

Good news, the Barbet is officially on a breed drop down menu on at least one website in the UK.

I can also confirm that Jilly and I have been accepted as Breed advisors after completing an extensive form, there were some tricky questions to answer but we both passed! 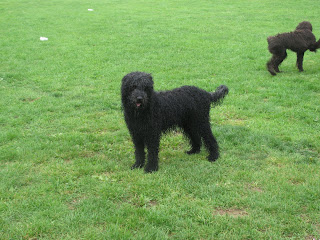 Dear Betsy is 5 years old today, she is not having the best Birthday as her idol has gone away for a few days Mountaineering  and she is rather subdued. She is such a very loyal dog, I knew she would miss him.
Here is a small taster of Betsy playing with her last litter, hopefully 2011 will be an exciting year for her as she will be having pups again. Every dog is good at something and Betsy is exceptionally good at rearing pups, its what makes her happy.

Is there anything a poodle doesn't do?
He was such a rascal in his youth.
http://www.youtube.com/watch?v=pzQpNAcc5kI
Posted by Wendy at 15:06

The most common question asked when out with any of my dogs is:


Is that a labradoodle?

After a few years you do get used to it, some people are interested in what you have to say, some people are disappointed that they could get a dog breed so wrong.
Bepop and Betsy have been called, briards, black Irish Water Spaniels,labradoodle, PWD, bearded collie! and on occasions poodles!
Bobby has been called a SWD, lagotto, poodle, labradoodle and a cockerpoo.
Jazz who is so obviously a poodle has been mistaken for a labradoodle numerous times.

Will this situation ever change? I think it unlikely but what may happen is that people will use the types of dogs rather than the breeds, and ask ''Is it a retriever?  Is it a waterdog?  Is it a spaniel? Is it a sheepdog?''
It might be a good time to apologise to the lady I met the other day and casually asked if her dog was a labradoodle, she was kind to me and responded well....it was a Catalan Sheepdog !! (beautiful dog by the way)
Posted by Wendy at 22:39

﻿ Fantastic news , Novaforesta Effie has A hips (European system), and a clear eye test.  Effie lives with a wonderful couple in Holland, so we cannot include her results under the health reports for the UK resident barbets.


﻿
﻿ ﻿ The Barbet in the UK at the moment is achieving a mean average of 8 which converts to an A in Europe, although with only 6 dogs hipscored in the UK we will have plenty of  test results in the future,when more pups go through health testing, however its a very promising start.
Posted by Wendy at 21:45

Beaters Day, good weather, good food, good fun,good company,good dogs. Really sad its the end of the season, but now I can put some time into training Bepop and work on the areas that she plays 'deaf'
﻿﻿ ﻿﻿
Posted by Wendy at 20:58