Caya the father of 12 goes mad!

No wonder his pups are so active!

54 barbets in Paris.
How exciting is that?
Two Novaforesta barbets are attending, Novaforesta Denzil and Novaforesta Dora, I wish them both well.
Just need to sort out our hotel, by hook or by crook we will be watching at the ringside.
Betsy and Bepop will be proud of their children.
Posted by Wendy at 09:00 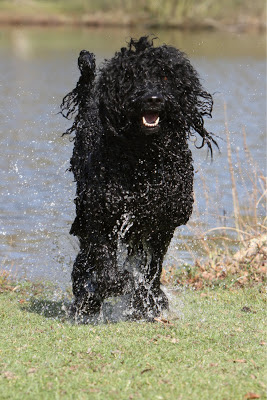 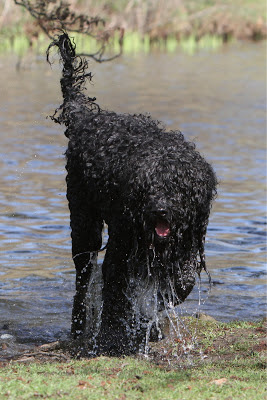 In France the Barbet has a points system called: Grille de Cotation, as seen below:

Confirmation of Barbets in France is from 12 months in age, it does differ with different breeds. 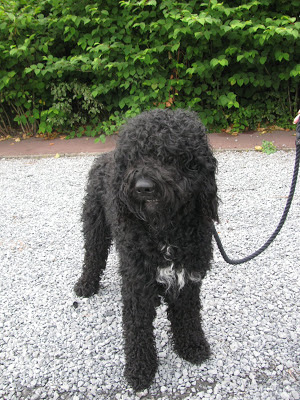 Novaforesta Duplo
Another country boy and another first timer in the show ring. Duplo was handled brilliantly by Charlotte, who is probably the most natural handler I have seen, she was fairly traumatised after the event, but lovely to watch in the ring, I so wish I had her nerves of steel. If Charlotte ever offers to handle your dog...say yes!
More later as work calls.....
Posted by Wendy at 08:49 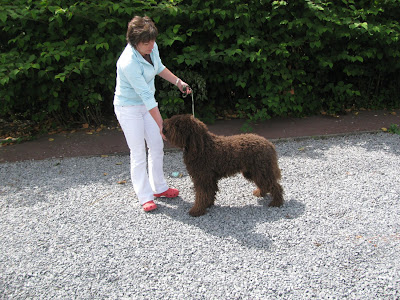 Novaforesta Eton
Eton is a bit of a country boy, so his first show under cover on carpet was probably a bit of a surprise.He is so full of fun, it almost seems sad to see him behave so well in the showring, he spends his spare time play bowing to other dogs regardless of sex. Having said that, Eton has his photo retrieving a bird in the July copy of Sporting Shooter along with his Mum.Betsy and his sister Esme. We have yet to translate his critique from the shows, but he had lots of Excellants, and of course he has now been confirmed.It was a fairly equal share of winners over the weekend, and with only the 3 barbets entered the competition side was non existant. This is the second year running that not a single French owner turned up at the show, at least two of the dogs entered were actually French,and hopefully the confirmations will help the stats in France.
Posted by Wendy at 08:41 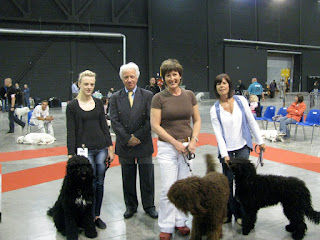 Starting with CONFIRMATION.
Two English Barbets and a Canadian barbet were confirmed by M. Dupas (see below) on Saturday 11th June 2011 at the French Championship show in Douai.Well done to Eton, Duplo and Ebene.The confirmation process was very easy, they check the dogs over,measure them, check teeth, tail set, coat quality, and check the movement.The support from the organisers of the show is worth a mention, the show secretary certainly was aware that a small group had arrived from the UK, but without fault our questions were dealt with and no problems with language barriers, just lots of smiling, we had such a good weekend.

An experienced and respected FCI Judge Mr Dupas has been an owner and handler of Afghans, Berger des Pyrenees and Shih Tsu. He has exhibited his dogs in France, Belgium, Netherlands, Germany, Switzerland, Austria, Spain, Italy, Portugal and many other countries of Europe.

A Barbet who is short and stocky 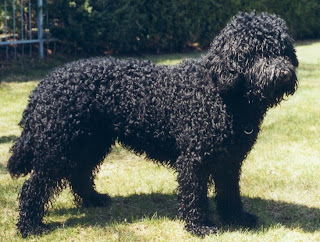 I have no idea who this barbet is, it looks like a male but then so does Betsy in a lot of photos because she is such a stocky barbet.
Whoever it is, its a good photo

An update as this is Axel Opus Un En O Majeur, a female barbet aged 5 or 6 when the photo was taken
Posted by Wendy at 08:28 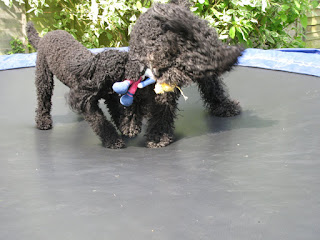 Why do my dogs insist that playing on the trampoline is safe?
I took this photo just before Betsy was cut short yesterday. Dogs love being liberated from hair, perhaps today she will be doing forward rolls on the trampoline.
Posted by Wendy at 08:08 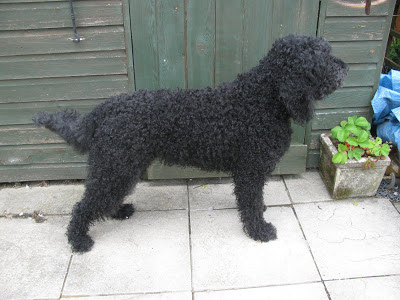 Finally at the age of 5 years, Betsy has had a short haircut.
She is 58/59 in height and weighs at the moment 29k, I have cut her to about an inch all over, including her head.
She is a very strong dog, extremely fit and rather heavy to be a lapdog or to be carried anywhere!
Posted by Wendy at 17:01