I had to share the show critique from the dog show we attended in Douai, France in June this year. However show results don't paint the whole picture of the dog and if Pi had a choice I think she would rather be in the forest. 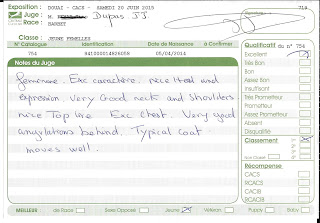 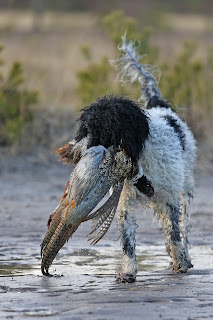 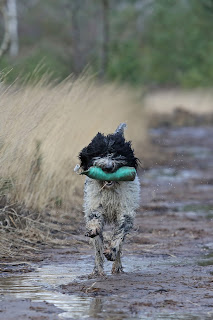 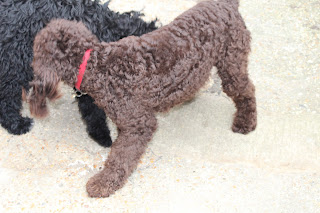 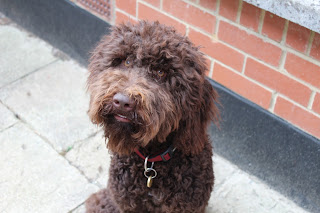 I was really pleased to see 'Buddy' a very sweet boy from Hallie and Cooper who is now 8 months old. His owner is learning how to maintain the coat himself and making a very good job of it. Buddy is quite amazing to groom, he is very patient and extremely tolerant and to be honest, just delightful. The owner is using a cordless clipper with different attachments to keep the body short but even, and they worked well on a clean matt free coat......it is possible to have a smart short coat on a Barbet without them looking shaved. Buddy is a credit to his owner.
Posted by Wendy at 12:28 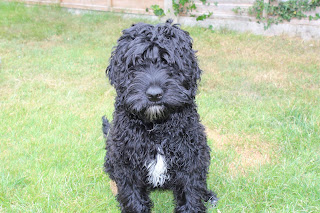 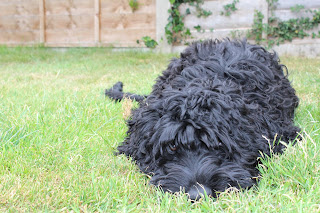 Can you believe that she is nearly 5 months old already and weighing in at 13.8Kg.

Novaforesta Lady Fern at her first dog show in France 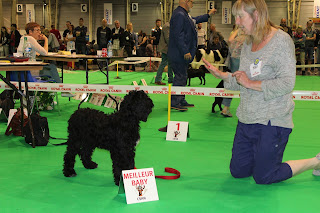 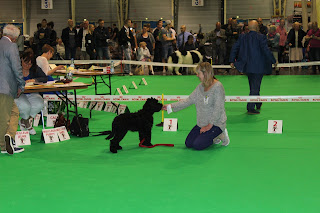 What a clever girl she was on both days in France, she won best puppy and got to go in the big ring twice........she was the only entry both days BUT it was very good practice for her, and lovely for us to spend 2 long days with her in a very busy, noisy environment.
Posted by Wendy at 12:37 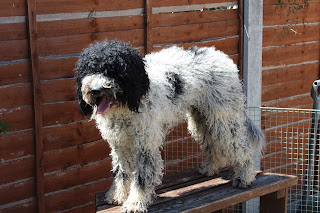 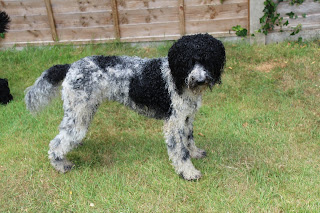 As you can imagine I am very pleased that Pi has passed her health checks for breeding.

She has passed her eye test so has a clear eye certificate dated June 2015.

This lovely girl with her beautiful markings has just been to France to be confirmed, we attended a 2 day show in Douai and on the first day we were lucky to be judged by the very knowledgeable Monsieur Dupas who placed Pi as Best Junior.


On the same day Pi was able to take the TAN  ( water retrieve/sociability test) with several other Barbets, once again we were lucky as Monsieur Goubie another expert judge was overseeing the test and I am pleased to say. Pi passed with flying colours. 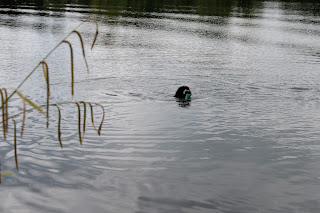 The last couple of months have been a social whirl for Pi, she had the joy of playing with the pups from Martha and Ooli, The London Pet show, Hips,elbows and eyes done, a weekend in France at the show, and a working test........after all her engagements she then had her hair cut which you can see in the photo at the top of the page.
The details for her 'husband to be' will be published shortly,
Posted by Wendy at 12:26