The Life of Pi the black and white Barbet 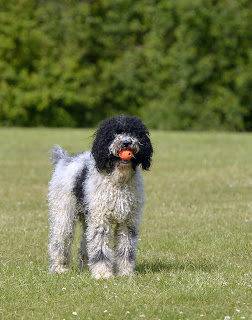 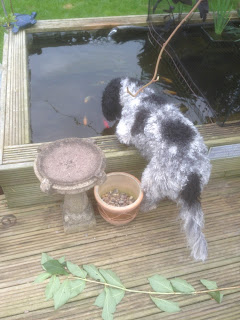 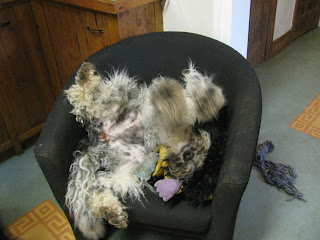 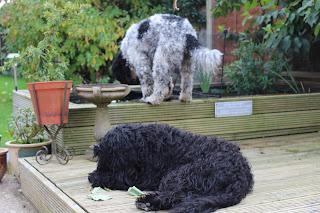 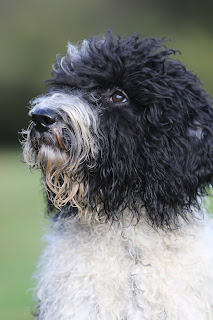 I have some news, sad news for me but at the end of the day it was my decision as sometimes you have to accept you are not ''superwoman'' . The lovely Pi, Netis Jitterbug came into my life with encouragement from my Mother, which was a surprise as she had always said I had too many dogs. She also suited my long term breeding plan as she was a lovely combination with a Dutch male that had come into the UK who I had a soft spot for, as his Father was the male I had the failed mating with Betsy the Barbet we lost at 7 years old. Pi passed all her health checks, 4/5 hips, 0/0 elbows, 2 clear eye certificates, D/D locus , VWD type 1 carrier,  Tan, an excellent show critique from France, the list is endless....she was a perfect dog for breeding as she is also of excellent temperament.Pi went to live with a wonderful family, it was a difficult time but I want all my dogs to be happy and Pi was looking sad at times as she is a very affectionate girl, it was a better life for her as I had only ever planned one breeding as there are already so many Barbets with similar genes, afterall I only have 2 hands to stroke dogs , it was  right for her but it took a long time for me to get over as I missed her terribly and felt very guilty. However in early 2016 I finalised my breeding plan for her, late in the day but I had lost my Father in 2014, and my Mother in 2015. So after so much grief what could go wrong ? Firstly the Dutch boy had been removed from breeding, so I chose an English Stud who when Pi was ready for mating drank some stagnant water and was immediately very ill and not feeling very passionate and he remained ill during her fertile time!, not being nervous about travelling we had a 48 hour window to find a male that would be a good combination for the breed in the UK, my first choice in Holland was denied due to Pi being under 30 months, then by chance we found another male in Holland that I was happy with  ( remember at this stage I am thinking of combinations for new blood in the UK and a combination that would work with Martha,) Meanwhile our window for breeding was getting shorter and we knew we were cutting it fine. So a quick dash to Holland arranged, dog wormed, channel tunnel booked last minute, hotel booked. A 5.5 hour delay at Eurotunnel meant we arrived at our hotel at 1am, we had planned to be there at 5pm. Anyway to cut a long story short, we tried first thing in the morning and Pi was really not interested, and timing wise I think we were pushing our luck had we got there at 5pm . As soon as we realised it was too late for Pi we left for home. We waited for her next season, and this time I had decided to try chilled semen from overseas, this failed once again over timings I believe, we don't have instant progesterone checks in the UK so we get our results in 24 hours or longer and this also means nothing over the weekend. In hindsight using a female who had not produced was my error and I also chose a reproduction vet that was useless over communication!. The lovely family who have Pi kindly said I could try again but it is now 2017 and this year ( very shortly) we will become grandparents and 2016 was my window to breed Pi as I also have my lovely Martha (2 failed matings last year is another story!) and her daughter Snoop who has passed her health checks with flying colours. I am only telling the story about Pi as I don't wish to hear rumours that she has been spayed for any other reason. Pi is very happy with her family and my breeding plans have changed yet again as Pi and her husband were to have made a male for Martha in the future! and when you hear that it is all about money...think again as Pi to date has cost me about £8000