Fantastic news which can be read here :

You will need to use the translate button.


Lotus who is the daughter of Alba and Ooli, so a proud moment as you must all know by now that Ooli is Novaforesta Dudley :)

Sadly I didn't get a photo of Lotus and Claude together, as Claude won best boy and Lotus best girl so they were in the ring together to decide which would be the best of breed, which if you read the above, was Lotus.

This could be handy if you can knit.

The perfect teeth in a Barbet 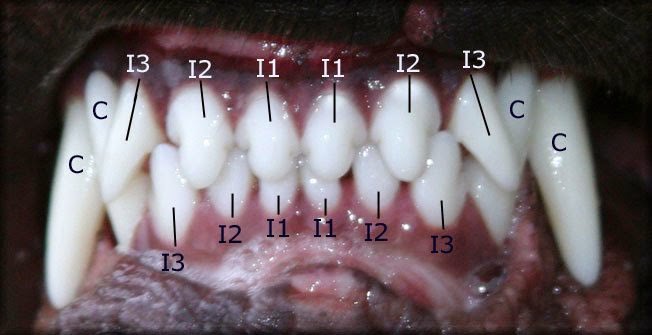 This is NOT a set of Barbet teeth, but just a lovely example of the scissor bite. 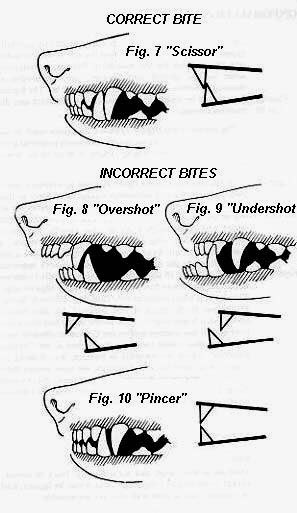 There is always confusion over the correct bite so I have tried to make it simple.
The Barbet should have a scissor bite, although a level bite(pincer) is also acceptable for showing,breeding and conformation.

I would make a dangerous guess to say that teeth in the Barbet breed has been overlooked due to the small genepool and the fact that most breeders have to take onboard how closely related dogs are, and what more serious health implications there are to combinations for breeding.
I personally would rather own a dog that had crooked teeth than hip problems.
I personally would rather own a dog with an incorrect bite than one that had seizures.
The list could be endless.......
So what you need to do is have a look at your dogs teeth, and also look at the bite and let your breeder know......if breeders are not informed then improvements will not happen.
This is a good site :

The link above goes into more details about the bite.

There is quite alot on the internet about teeth, but the 2 sites I have used today are:
http://www.felsteadgundogs.com/canineundershotandovershotjaws.htm
http://www.mudicompass.org/teethandbite.html#ANCHOR_Text5 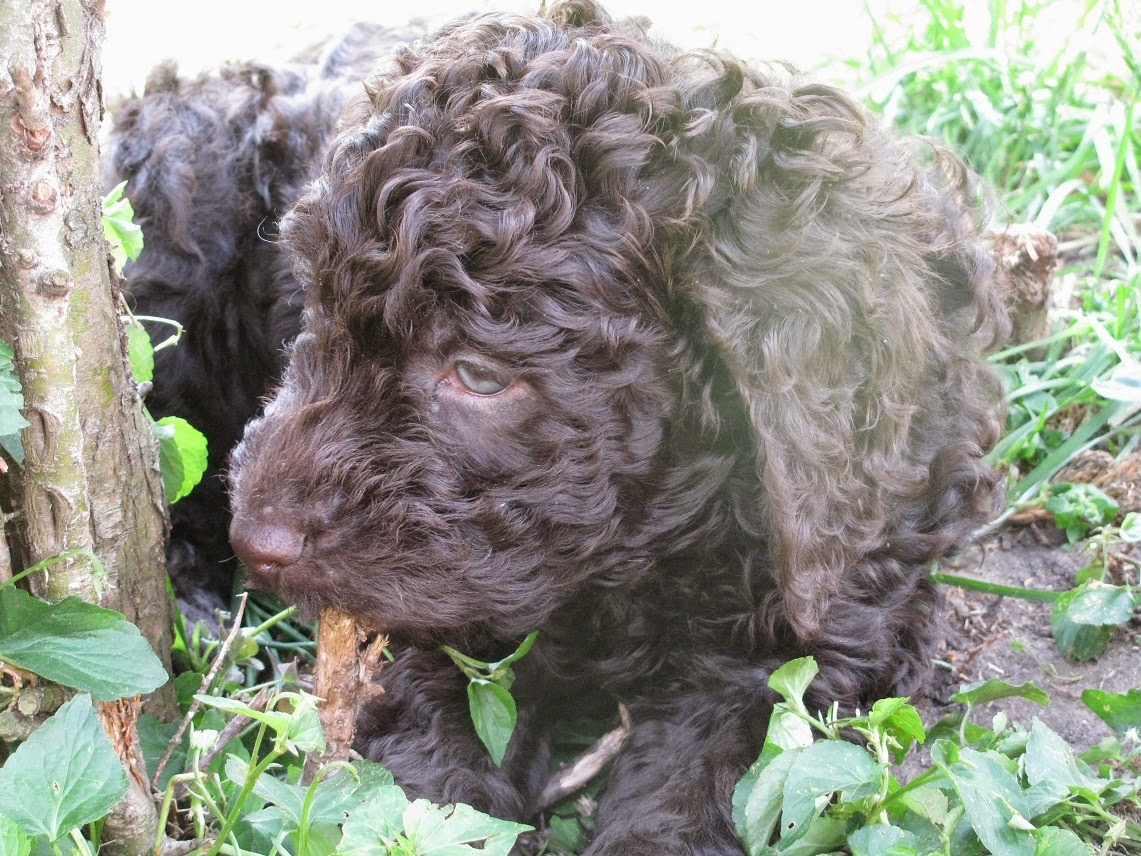 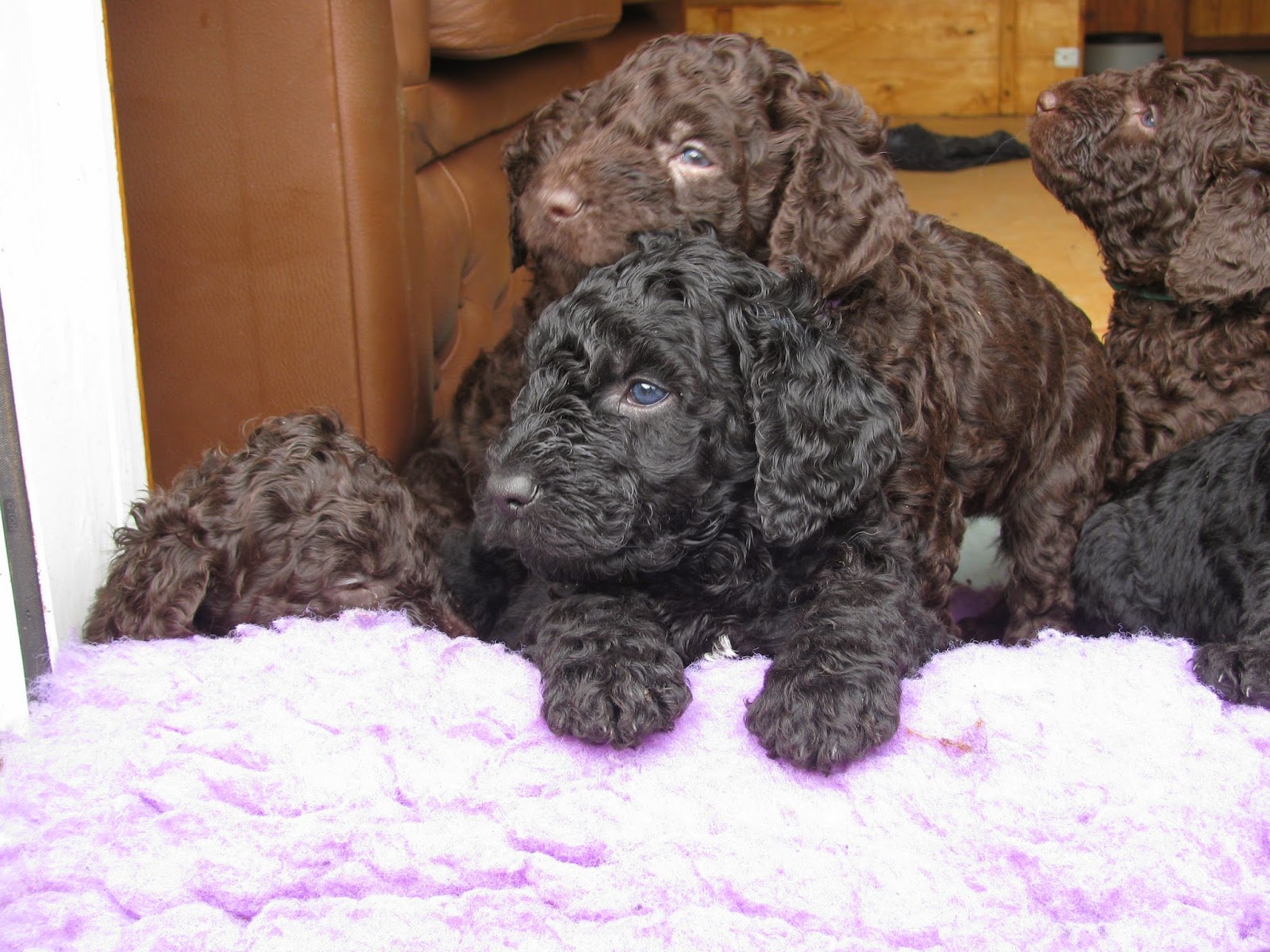 It was a year ago today that 7 little rascals were born, so happy Birthday to Agnes, Ralph, Hugo, Rugby, Bobby, Harpo and Obi.
I will try and get some photos of the pups are grown up.
But just to start RUGBY:

I have had several times recently that I have taken dogs to the vets, and I accept I am probably the dog owner that they don't particularly welcome as I ask too many questions and disagree too many times.
From my point of view, it costs me £30 to seek a vets opinion on my dog before any treatment and I am happy if I leave empty handed.
However maybe I am just more aware of doggy language or more aware of how people handle dogs, but some vets don't seem to have a clue.
One example recently was Martha with her boosters, I was asked if she was an aggressive dog by the vet, he then went on to ask me to put her in a headlock and hold her very tight as he was worried she would react to the injection. Now, had the vet actually stroked Martha he could have checked that she has loose skin so less likely to react to an injection, she was also not showing any signs of fear or anxiety. Anyway I said she will be fine and refused to put her in a headlock as that would cause her to be fearful. Martha didn't flinch getting her booster, but it did make me realise how easy it would be to change a good experience at the vets to being a bad experience.
Vets do have difficult jobs, they have a serious risk of being bitten and the consequence is time off work, but they should also have an understanding of dogs and be able to weigh the risks involved.
I had to go back to the vets recently with Martha as she seemed to have something in her foot that we couldn't see or she had perhaps broken a bone, I went to a different vet! and all the time we were talking she was handling/stroking Martha preparing the dog for examination and I suspect sussing her temperament.The outcome was that as you would expect Martha was nearly asleep and it was a very easy examination.So even though the vet hurt Martha it was still all very calm.
Jazz at nearly 14 years has also been to the vets for blood tests, he is virtually blind and deaf so I requested that the blood should be taken with us present, he was asked to sit !, that fell on deaf ears, so he was pushed into a sit! he has old bones so any position for him is calculated and slow, before I could speak the vet nurse  put him in a headlock...hmm, and the vet was cutting hair on his leg for  blood and telling poor Jazz to keep still as he was showing signs of stress. Jazz has endured grooming/handling all his life, he is a fantastic dog that has no fear of injections/needles/vets. At this point I spoke up and said that they needed to make him more comfortable and then he would be still, the combination of pushing him to sit, then a headlock had twisted his body and his legs were at a terrible angle. I got a Black look......but at least Jazz was able to lie on his side, and didn't fidget whilst blood was taken.
So all you dog owners, you know your dog better than any vet. If you think your dog will bite a vet or you, then be fair and warn the vet, there will be less stress on the dog if you muzzle it in the carpark. My attitude is that if for any reason any of my dogs were to try and bite, then it would be me that got bitten.
If you are not happy about handling, then speak out but be prepared that your dog is your responsibility and if you can't touch your dogs leg, then why expect a vet to be able to, why should they risk being bitten? Handle your dogs well, then you will never have problems :)
Posted by Wendy at 10:21

Labels: fear of vets.Vets and handling, vets and dogs 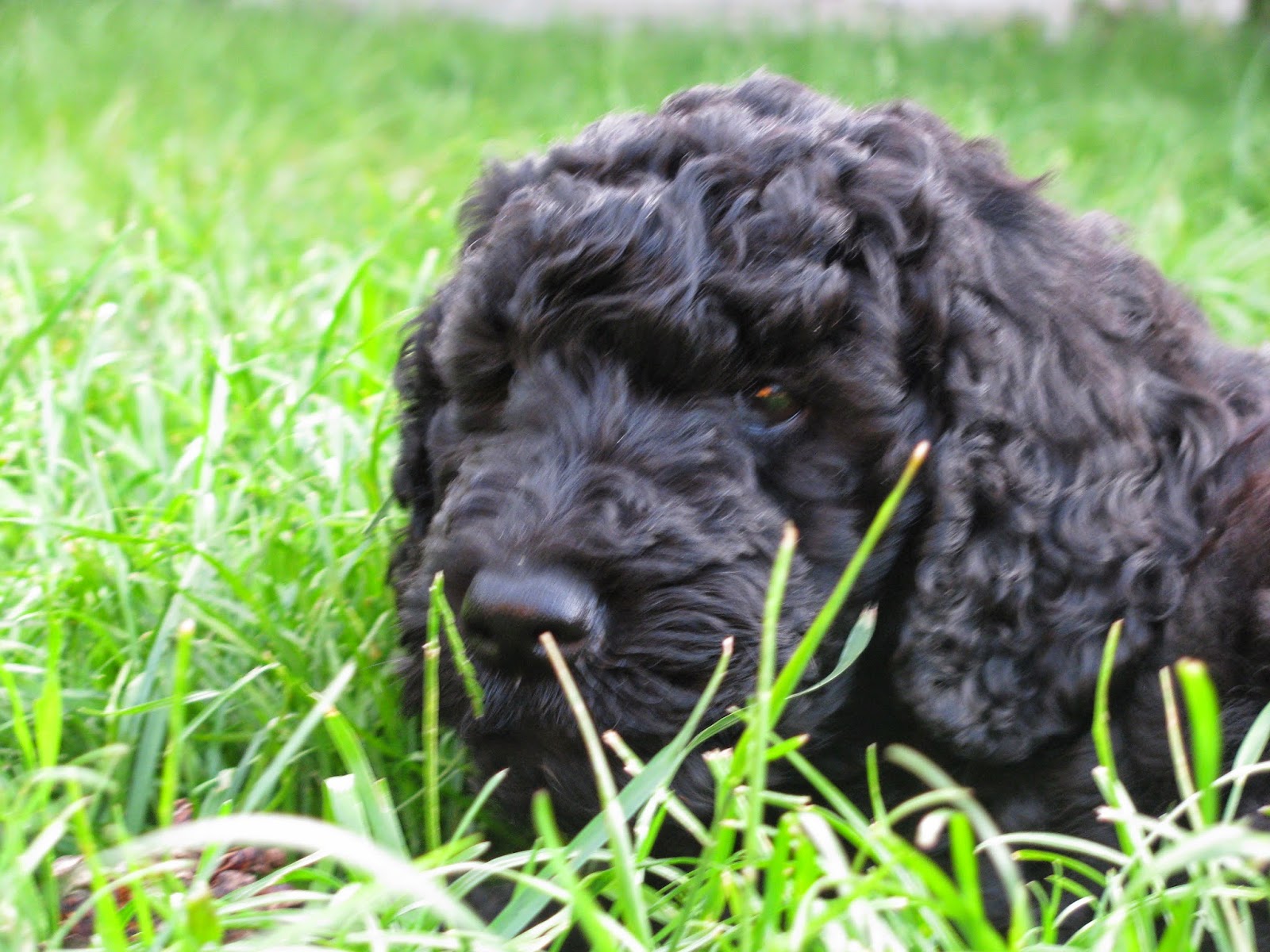 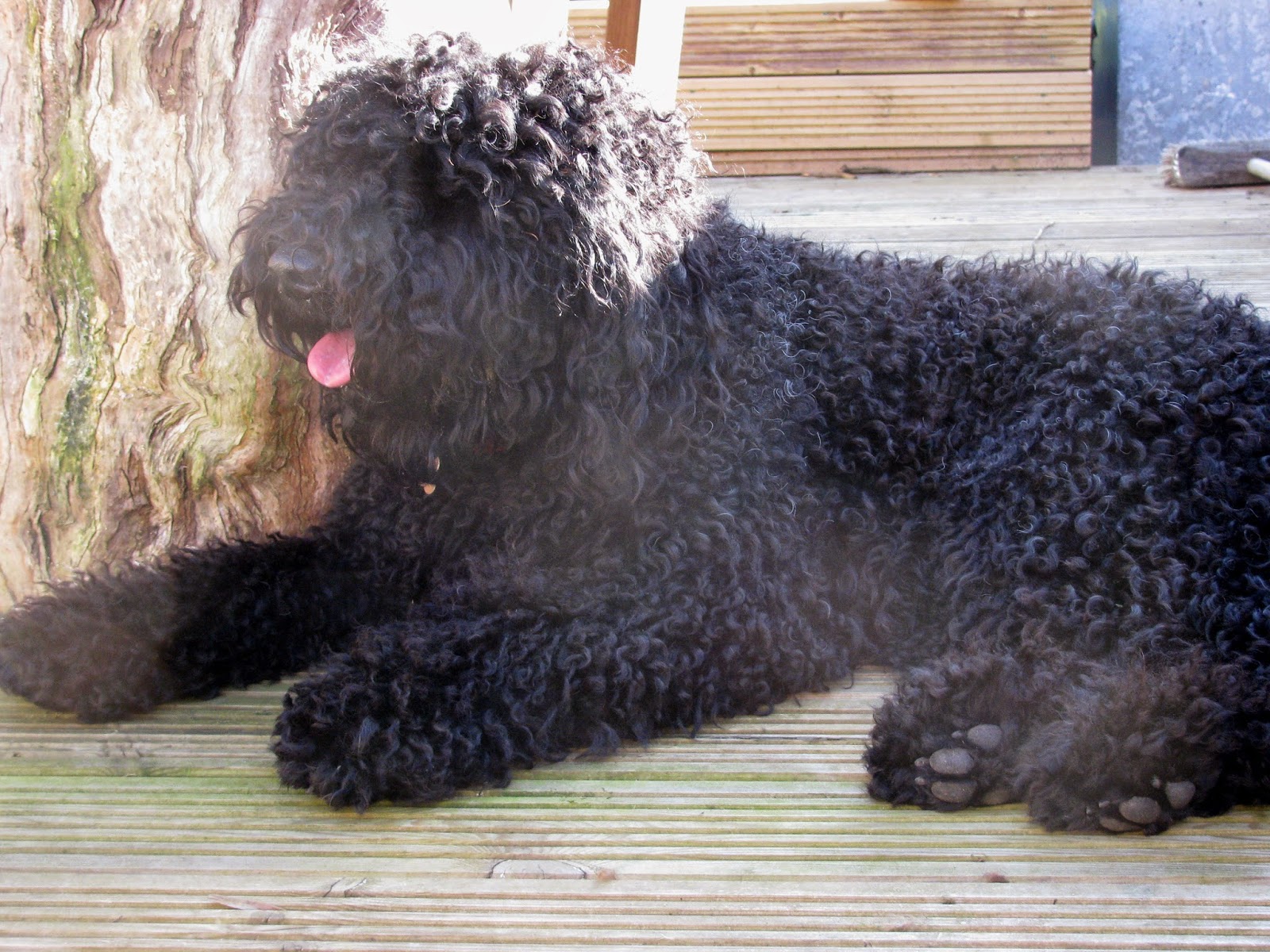 2 years old today, so a big Happy Birthday to not only Hallie but also her 13 brothers and sisters
Posted by Wendy at 21:02

It doesn't take much for me to avoid housework and my list of jobs!, as looking in old books about dog history is far more interesting although you never get a concrete answer you do for a short space of time find yourself thinking about life back then.
Recently I met several pointer crosses, both move beautifully so that made me think about the pudel pointer, as some of these look like the Griffon Boulet, which has a connection to the Barbet and you can see from the video how similar.

The Griffon Boulet had  FCI Breed standard 174,and sadly the breed has died out one presumes  not because of ill health but because it was not a popular breed, the coat was probably its biggest problem as there are other similar breeds with easier coats, the pudelpointer being one of them.

So back to the Pudel pointer which was possibly one of the first poodle designer crosses for the shooting world, although I suspect the costs were less if you wanted one.
In 1860 in Germany a Mr Walther who wanted to make a versatile dog that had all the attributes ,hunting,pointing, and retrieving and being able to work the land and water  and his plan was a Barbet with a Pointer, English dogs for the field were highly sought after and then most breeds had very specific jobs. It must have been a mad time in the dog world and we should be forever grateful that all those involved picked simple names to identify the many breeds that were being formed. If you take a minute to think about it, it makes sense.....you have the breeds by County or Country and you have the breeds developed by a person, or there is honesty when they cross two breeds, like the pudel x pointer.
What I cannot find out is how much success Mr Walther had with his project, because a new man on the scene in 1880 Baron Von Zedlitz crossed the poodle and pointer and the breed developed from there using 7 poodles and 100 pointers, on that ratio it must have been hard to lose the poodle features so the good old poodle was quite a fixed breed in 1880.
If I could go back in time I would like to ask Mr Walther what went wrong with using the Barbet, or maybe it was simply that he didn't have the resources to expand the breed at that time, or was it a question of coat colour?
It is also a great shame that going back in time that no one took over the Barbet as a breed, it was used to make Griffons, so why didn't these important and significant people in the dog world want to make something new rather than establish what was already there.
Even in 2014 the Barbet lacks recognition and as a breed it is continually compared to other breeds which is probably history repeating itself, as the other waterdogs become more popular will the Barbet be lost again?
Am I comparing? No ! it saddens me as it is just a trend, the curly PWD is getting rarer so it figures that breeders of the Barbet are selecting for wavy rather than curly in litters or just maybe PWD dog breeders are selecting puppies that are more Barbetlike :)


I have put the photos of the PWD as it shows very easily that when trimmed it is easy to identify.
There are differences between a Barbet and a PWD, the tail, hock, length of body, length of muzzle to name a few.
Posted by Wendy at 14:54