The Kennel Club and Barbets

As most of you will know, I have sent the application to our Kennel Club for recognition of the Barbet.
I only wish I had read this article first as the opening line nearly 20 years ago in the Kennel Gazette said

Now if that is what they thought/agreed with so many years ago, then hopefully they will look on the application and accept the Barbet.

I will be quoting other bits of the article and also trying to scan the picture as it features 2 working barbets
Posted by Wendy at 15:26

A very appropriate title for the weekend

Sex:
A very successful mating of two barbets yesterday, so good news in 4 weeks I hope.

Lies:
Take a few seconds to read this...


As we don't intend to get through the entire alphabet, by breeding lots of litters, we chose names that have a special meaning for us. We hope they are not as awful as some, as we really didn't like the official name that was given to Odo.  We recall the breeder picking him up and saying,

"This one's called Denzil, 'cos I think he looks like Denzil Washington"!  No!  None of ours will be named after anyone that happens to be the same colour,  a very strange thing to do!!!

The quote above is more a reflection of the downside of being involved in the dog world, normally I can read comments about myself as a breeder or comments about my dogs and just laugh as the malice behind the words is envy not the truth.However today I have a headache and I am not laughing. Firstly I don't ever say ''cos'', Secondly Denzil is a Cornish name, Thirdly had I named my pup after Denzel Washington, I would have spelt it Denzel NOT Denzil.
As a breeder naming pups you only ever pick names that you like or conjure up a good memory, so even if I had picked Denzel as a name because of Denzel Washington it would not have been derogatory because they happen to be the same colour but because I like him as an actor (which I actually do),
I own 2 black barbets, strangely enough they have produced quite a few black puppies, Daisy,Drew,Diamond,Darcy,Duplo,Dickens,Dorje,Drake,Dora,Damsel,Dudley,Doug,Daria and Demi.
I also have a black shaggy boy named Bobby, I didn't name him and to us he is Bob, but rest assured that this is out of respect for the wonderful Bob Monkhouse not Bob Marley.
Video:
Julian does a fair mileage with our dogs, and today he took the camera. We are lucky to live in such a beautiful area and I believe the dogs would agree. 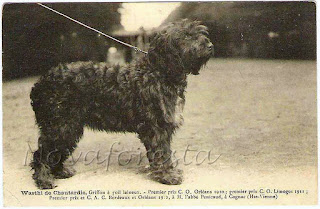 A new photo found and what a beauty.
This breed was commenly associated with the barbet and to this day you often see the name cited as a second name for a barbet and you can see why,
Main difference in the standard was that this griffon was never curly, it was considered a fault.
A great shame that it didn't survive all the challenges a breed has to deal with to still be in existance today.
Posted by Wendy at 21:19

As the registration of puppies is on my mind at the moment, this link below is worth a read.
Well written and a good explanation on how Kennel Clubs registration system works.
All Novaforesta pups have French pedigrees and are registered in France.
They are also registered on the Kennel Club  Activity register in the UK.
Why both?
All Novaforesta pups have been  DNA  profiled, and this has been cross referenced to the KC activity register.
So all the health checks prior to breeding can also be cross referenced by the KC.
The past for the barbet is complicated with paperwork so I wanted to make sure my papertrail with my puppies would be simple and easy to trace for the future.
A word of warning, although not relevant to Novaforesta barbets
When buying a pup always remember that the words ''KC registered'' may mean the activity register NOT the breed register.

will be French registered.
This means that these two litters in the UK will be issued French pedigrees UNLESS of course The English Kennel Club accept our recent application and recognise the Barbet as a breed in the UK.

A heartfelt thank you to the French Kennel Club for looking after their breed.
Posted by Wendy at 14:40

Betsy Bonheur is a Grandmother at last 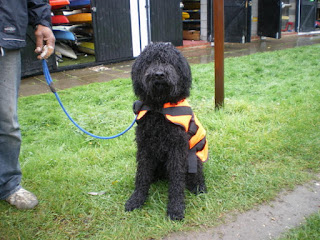 Novaforesta Denzil has sired a litter of 5 pups, positive news for the barbet numbers worldwide, and even more positive that he was able to sire. There are a few males (not in the UK) that are failing in this department, and as Denzil was sold as a pet and he was not quite complete as a male pup, time has proved that all is well and the beautiful pup that left here nearly 4 years ago is now a Father of 5.
Betsy is very proud of her son, and hopes the offspring grow into bonny barbets.
When the hip score results of Novaforesta Denzil are published and his eye test certificate available, they will be added to my list of results.
Posted by Wendy at 14:09

A new old illustration of a barbet

Firstly, a round of applause to the vet who kindly passed on these illustrations and had actually heard about the breed.This illustration is very exciting as the barbet featured is called Lowe, this barbet is mentioned in a book in 1881 (http://www.novaforesta-barbet.org.uk/biblio1.htm#nineteen )
''
''At the Dog Show of 1863, there was a prime barbet, Lowe owned by Mr. Favre. This dog had a head which slightly resembled a small Newfoundland, only the ears were longer and were covered with wool, but the muzzle, a little longer, was almost bare; long hair did not cover the eyes, as is found in almost all barbets.''
Maybe its just me, but if you look closely the Griffon has two heads,
Posted by Wendy at 12:02