Why do I love this dog?

I have forgiven Bepop for being such a grump at the Game Fair, its hard to be cross with her for long. I knew it was going to be a bad day,we arrived at the gamefair, she jumped out the van very excited, surveyed the situation and hastily jumped back in the van, and curled up into a tiny ball, she knew what was ahead of her!!. I have since told her that was her last Gamefair appearance, luckily her children are more excited about being in the pen and they make the effort to wag their tails and say hello to the thousands of visitors. Bepop spent the day curled up behind my chair trying to impersonate the grass she was lying on. When she is depressed, thats how she deals with life, curls up and its amazing how small she becomes, her head disappears and she looks rather like a shaggy cushion, no tail, no legs, no head, just black curls. On a positive note, she didn't dump in the ring, and those visitors that had dog biscuits were greeted in a normal barbet style, In hindsite, she may have been hungry as we had an early start (4.45am) so perhaps I need a slapped wrist for that, but grumpy dogs and a long day out at the gamefair don't mix. Remind me in 2012 not to take my dearest dog.
Posted by Wendy at 08:25 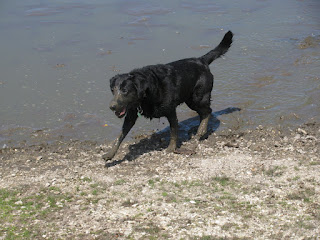 Hard to believe this is a labrador, imagine the state of Bepop she was sooooo muddy!
Posted by Wendy at 08:23

Good news for our breed.
January 1st 2012, the quarantine/importing rules are being relaxed inline with the rest of Europe.
This will mean that a barbet can come into the Country at 16 weeks, after he/she has had a rabies vaccination at 3 months, and then the standard 21 day wait.
This really does mean a green light for new barbet bloodlines, which can only be good news for our limited genepool.
Our breed does like most breeds need socialisation from an early age, importing at 11 months old means that a new owner misses those vital months and its hard to expect breeders overseas to give a puppy the one to one attention it needs.
Posted by Wendy at 08:39 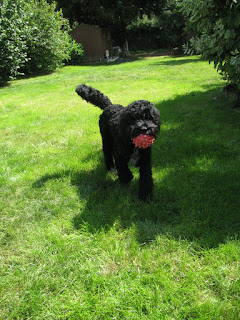 This photo shows that you can take a barbet short, and they still look like a barbet.
Ooli has very strong,thick bone so he is easy to take short as he still very much in proportion.
Luckily barbets do not smell, my hands yesterday were black and greasy after grooming him, he has a very oily coat, yet when I bathed him, the water ran clear as he now swims in his leisure time.
Next job is to bathe my gang, Bepop is going to the game fair on Sunday, so she is my priority.Betsy will be next, short back and sides for her due to her condition
Posted by Wendy at 08:08

Novaforesta Dudley time for a haircut

.Always a pleasure to see Ooli and today he had a much needed haircut.Ooli now spends much of his time up in the forest, and has discovered that he is indeed a waterdog as a small lake is now part of his walks 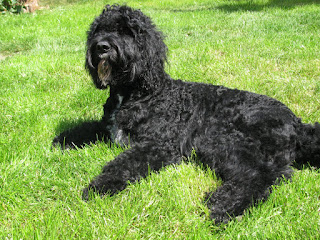 A much happier Ooli
Posted by Wendy at 22:06

Are my dogs bright? 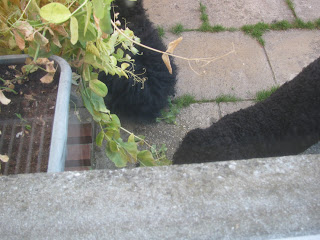 Typical, for many weeks my dogs have been eating mangetout with their dinners as I have been growing in my allotment and also have plants at home. I have been careful not to use the plants at home for the dogs just in case they made a connection.
Yesterday, I made the error as I was short of greens, so picked (whilst being watched!) mangetout from my garden at home.
This morning, two dogs were helping themselves to a crunchy breakfast.
Today I will pick the rest as the plants are doomed, yes I can say ''no'' but when I turn my back, they will find it hard to resist. Life is fun with dogs, especially with poodles and barbets, these breeds plan ahead, and think, always one step ahead.
The culprits in the photo are Bepop and Bobby, Jazz and Betsy were still asleep!
Posted by Wendy at 08:49

54 Barbets , although a few didn't show on the day, still for the breed a fantastic turnout.
The breed was not in the ring until the afternoon, so we arrived a little later than the previous day after picking up a couple of hitchhikers! and then spent most of the morning in a queue at the vets office to have our dog`s passports stamped for their return to the UK the next day. I have to admit it was a frustrating wait, but we were in France, and it`s probably an advantage that I don't understand the language well enough to rant or make demands.
The results are shown below, a French judge this time, one that has judged Betsy and Bepop before and liked them. Although (Novaforesta Dora) Bonnie got an excellent, she was not shortlisted for the final 6 dogs which I was disappointed in, having seen the judge giving her a good look, he had definately liked Bonnie, but that is dog shows for you.I am very biased, but there were a few barbets that I would have loved to bring home.

Odo (Novaforesta Denzil) was graded `excellent`, Ebene also got an excellent and won her class, although she was the only entry!.
I spoke to as many people as I could, but its always difficult by the ringside as when your breed is being judged you are watching the dogs, and when it is over, the next breed and all their owners are waiting, and so its time to move on.
More photos later........the dogs that won both days were lovely, a deserved win, and to win at the World Dog Show is an amazing achievement.