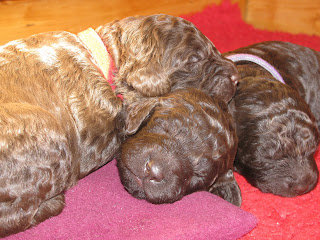 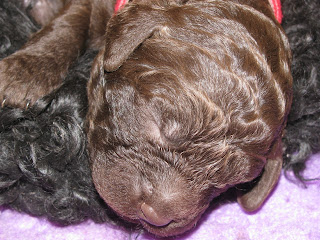 The webcam is down as we are doing a spot of rewiring in the study, so here are a few photos from today. 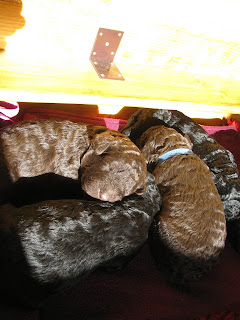 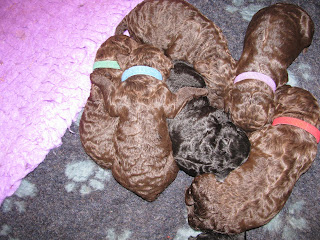 I think blue collar boy is going to be a dog who likes his cuddles.
Posted by Wendy at 20:54 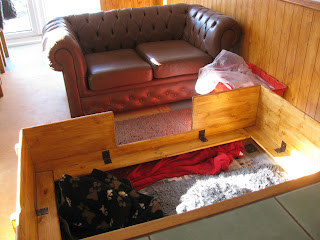 If you have viewed the webcam you will have seen Bepop being devoted to her pups, from about day 10 she is now just starting to sleep on the floor just outside the webcam view. The two seater sofa is my viewing seat and my bed at the moment as I am still sleeping downstairs with her just to make sure that she is ok during the night.Yesterday she had another quick bath as the weather has been so warm, and I gave her a brush....she didn't appreciate either action  and probably to prove a point she went off down the garden to dig a hole!!!
Posted by Wendy at 20:28

i have to admit that 7 puppies is a lovely number, a lucky number and fantastic for Bepop to raise. The pups are very contented, although red collar boy is taking advantage of his size and he makes sure that he never has hunger pains!. They have easily doubled their birth weight, and we are on countdown for their eyes to open. I will post a photo of my viewing seat, you can't see it on the webcam but it is where I spend most of my time watching the pups, everyday they get stronger and everyday they make different sounds. Bepop makes a wonderful noise when one puppy is away from the rest, it is an identical sound to the noise Bobby makes when he sees another dog out walking that he cannot reach, so it has to be a calling communication, odd though as puppies are deaf at this age. 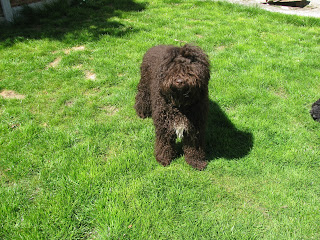 Martha is a real sweetie, and since the puppies is learning a little more about doors being shut. Bobby learnt about doors being shut when the girls were in season. It is hard for those dogs that always want to be with you to suddenly find out they can't. Martha has never yet been on her own as she was with another puppy in Holland until 16 weeks, and then joined my household. What does Martha do best ? she is the just the most lovely dog for her cuddles
Posted by Wendy at 15:19 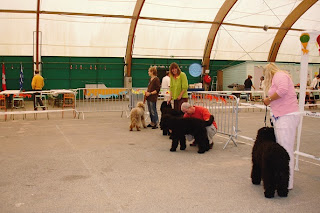 I have just found this photo from 2007, it was our first French dog show, luckily not many spectators!.
Le Blanc.....and yes Julian is showing Betsy and I have Bepop, Julian has not been in the ring since that   day, can't think why....
Posted by Wendy at 13:52 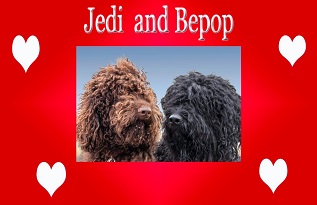 The 7  puppies will of course have DNA profiles, and for this litter I will also be confirming parentage just in case the son of Jedi, a beautiful boy called Deejee was successful and has sired a puppy or two. It is highly unlikely but it is better to check. Life would be easier if it were just down to the colours of the pups as to who the Dad was........I am still surprised at the ratio of brown puppies, The pups are gaining weight rapidly and are adorable.

The four brown boys have collars on, just in case you are wondering who is who.
Posted by Wendy at 19:01 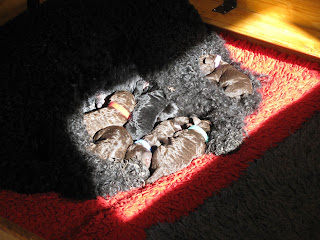 I always think the best photos are the ones that make you run for your camera as you want to capture something quite magical.
Posted by Wendy at 18:54 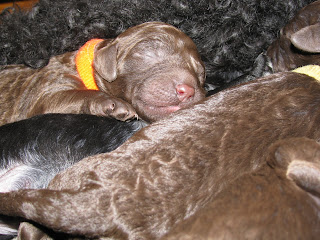 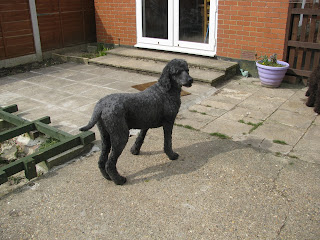 13 years old and still as naughty as a youngster!. Jazz has recently moved out and retired to live by the sea with my Daughter. He now has his daily run on the beach which has given him a new lease of life, and he now has toys that don't get taken by the other dogs. The good news is that he comes back home almost daily, so that he never has to be left alone whilst my daughter works. He is in very good health, although he has lost most of his vision and his hearing seems to come and go. He has never had a Birthday cake on his Birthday as our family have lost so many birthday cakes to him throughout his 13 years that a doggy Birthday cake would almost be a letdown!!. Happy Birthday lovely boy and hope you have many more to come.
Posted by Wendy at 21:13

It has been a long time since we had the webcam on puppies, but here is the link:

BARBET WEBCAM
Posted by Wendy at 10:15 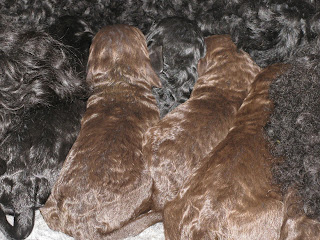 Welcome to the world, 6 beautiful healthy boys and 1 delightful girl. All are very strong and healthy and Bepop is very settled with them. They started to arrive in the  early hours on the 17th April, and it was a tough labour for Bepop. She started huffing and puffing all day on the 16th and was very restless and not eating, and the first puppy arrived at 2.10am  on the 17th. The final puppy arrived at 10.30pm on the 17th. Sadly we lost two puppies during delivery which upset me more than Bepop, and yesterday we lost a very small weak little girl but on a positive note the 7 puppies we have are so strong and robust that is now what is important.
Posted by Wendy at 10:12 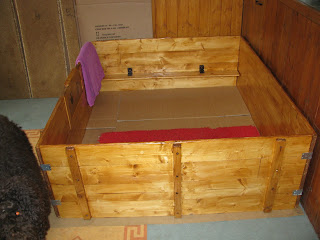 I know we are cutting it fine, but we are nearly ready and Bepop being such a clever dog knows to keep her legs crossed.  Julian has made a mega whelping box, so think that there may be room for me to sleep in there with her.
Posted by Wendy at 13:51

Countdown has started for Barbet Bepop 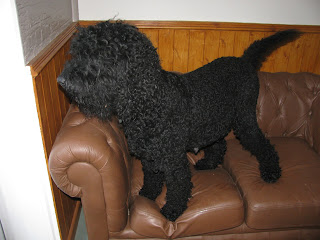 Well we have 7 days to wait (ish) and we are 2/3 through decorating but 2/3s is better than 1/3 so I am hopeful we may still get it done!. Bepop is sporting a rather short trim as when I got her on the table to trim her short she was in fairness as good as gold but I could see her discomfort, I did allow her to lie down but she still looked uncomfortable so out came the clippers. She is such a lovely shape that if I may say so myself I quite like her short, and should she have lots of puppies there will be advantages, at least she will be less likely to crush one as she will now feel it. She went to the vets yesterday for a check, and she has put on 6.5kg, although you wouldn't know it watching her running around the garden and still trying to leap the gate. As the countdown starts, she is definately getting more soppy, she wants more cuddles and her life is food, food and more food.   The whelping box is still in pieces on the dining room table, tomorrow hopefully it will be ready. I will try and get some more photos tomorrow,
Posted by Wendy at 22:17

Barbet puppies born in the UK are NOT registered with our Kennel Club as at the moment they are not a recognised breed. This means that the breed cannot be shown in the UK or enter working trials, although showing in Europe is very easy as the breed is fully recognised.
However, some litters will be officially recognised by the French Kennel Club and it is important to check that a mating certificate is available to view as if not then until we get recognition in the UK any other Barbet puppy is not classed as an official Barbet regardless of whether the parents are fully recognised with pedigrees. If you are interested in a Barbet puppy, then expect to pay approx £1000 with a full French pedigree and a DNA profile that will support the parentage of the line.
All Novaforesta puppies are official Barbet puppies, they will be registered with the French Kennel Club, the main reason for me is that it adds to the amount of Births recorded for the breed in France which is really important for a breed low in numbers worldwide
Posted by Wendy at 21:48

Martha has a beautiful sister 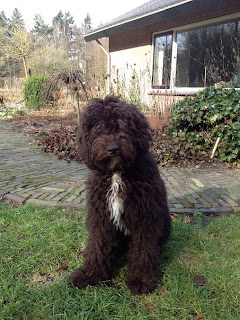 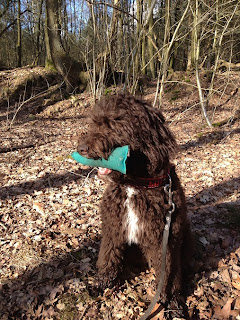 Meet Lili, the sweet sister of Martha who is living in Holland.......they could be twins. lili is going to be doing gundog training, so I hope to follow her progress and show Martha how clever her sister is.
Posted by Wendy at 21:27

Wow, deep snow for the new bundle of joy who is now safely settled in his new home with his new friend Ziggy.
Toby is officially known as:

Exciting times ahead, as having met Tobys' Father Esbjorn  all those months ago in Holland he was such a beautiful Barbet and now we have his Son residing in the UK- thanks to a wonderful Barbet owner (Carole gets a gold star) and a good breeder in Holland  (Astrid gets a gold star too)who took Toby out and about whilst waiting the 21 days after his rabies vaccination before he could enter our Country.
Posted by Wendy at 22:13

Barbet Bepop Mum to be 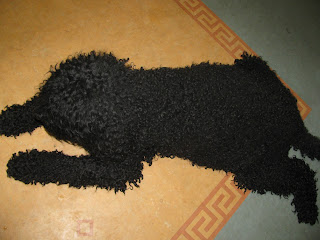 Bepop is expanding rather quickly and tonight we felt the puppies kicking, a magical moment for our family as this is when we start to panic! Bepop still has 15 days to go, it will go quickly as we are still decorating!
Posted by Wendy at 21:55