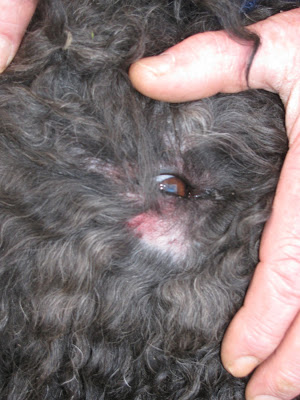 Poor Betsy was attacked yesterday by a terrier type dog.
The attack was totally unprovoked, Betsy,Bepop and Bob were on leads and the dog appeared suddenly and attacked without a warning, it just launched itself at Betsys face and refused to let go. Thank goodness for her hairy face, as this dog meant business.
To make matters worse, the owner who had been walking her dog whilst driving her car!!!!!!! was screaming ''kick him'' which worked in the end, although once removed from Betsy, he then attacked Bob.
Bepop had the sense to slip her collar and so she removed herself from the scene.

Sadly it will have affected Betsy, so we will make sure that she meets lots of nice small dogs. Bobby on his walk today, was slightly more reserved than normal with other dogs, but as he has a brain the size of a pea, he will be back to normal soon. Bepop was definately scared when dogs appeared suddenly today as she came back to my side,so she will also need to meet some nice dogs. So yesterday was a rough day for the dogs, but they will get over it and hopefully forget it, something that my poodle has never ever been able to do, he has never forgotten which dogs have attacked him in the past. Poodles bear grudges, lets hope barbets don't.
Posted by Wendy at 13:23