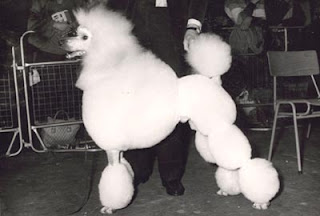 I have just found this photo, this is one of the boys (my favourite) from the small kennel where I worked.
1981 he was Reserve Supreme Champion at Crufts. I must find the photos I have of him as he rarely looked this smart!. I knew him as ' White' and my other favourite was a standard called 'Blue'  I didn't think those names were odd at the time, and another lovely female called 'Bridie'. I still remember going back to the kennels about 3 years after I had left, 20 poodles barking like mad, and then I spoke, it was uncanny the mood change as the dogs that immediately remembered my voice, became very excited, the others realised I was a friend rather than an intruder. It was an emotional day, when I left I knew it was unlikely I would see the dogs again as I had moved many miles away, those that know me 'goodbyes' are not my strongest point!.
Posted by Wendy at 20:21