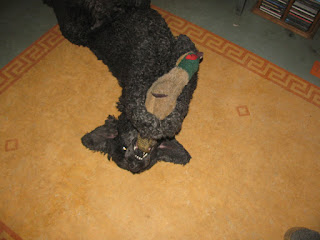 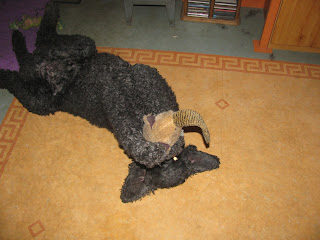 A question I am asked frequently, what are some of the differences between a barbet and a poodle, having owned both I can say that I have never seen my barbets manipulate toys like a poodle.
Bobby and Jazz both use their paws to hold a toy during play, its always a solitary game and  can be hard to capture as distraction will mean they involve you in the game, then they don't need to use their paws as its us humans that will throw it or play tug of war. Bobby and Jazz do this style of playing alot, the paws are used to throw the toy, gather it back up and then wrestle with it.
Note to self: hoover more ofton!
Posted by Wendy at 16:11